The vehicle, called a Shockwave Jet Truck, was racing two planes when it crashed, killing the driver, officials said.

The driver of a truck that could top 350 miles per hour because it was powered by jet engines died after the vehicle crashed on Saturday while racing two airplanes at an air show in Michigan, officials said.

The custom-built race truck, which was equipped with three jet engines and a combined 36,000 horsepower, crashed during the pyrotechnic portion of the Battle Creek Field of Flight Air Show and Balloon Festival in Battle Creek, Mich., about 50 miles southwest of Lansing.

Chris Darnell, the driver of the truck and a member of a family that had been part of the air show business for many years, was killed, said Barbara Haluszka, the executive director of the festival.

“Chris had a crash, and the jet truck flipped over, and, unfortunately, he did not live,” she said in an phone interview on Saturday night. “All other details are 100 percent under investigation.”

In a statement, Mr. Darnell’s father, Neal Darnell, said the accident was “a result of mechanical failure on the Jet Truck.”

“Chris so loved the Air Show business,” he said. “He was ‘Living the Dream,’ as he said.”

Videos from bystanders show the truck barreling down a runway at Battle Creek Executive Airport at Kellogg Field in pursuit of the two airplanes, with flames shooting out its back. An excited announcer declares, “He is coming fast! He is coming really fast!”

The airplanes involved were a Zivko Edge 540 piloted by Bill Stein, and a MXS-RH piloted by Rob Holland, said Ryan Traver, a festival board member, who added that the pilots of the civilian aircraft were not injured. It was not immediately clear how fast the planes had been traveling.

A thick orange-and-black fireball can be seen in the foreground of the video, and the vehicle, called a Shockwave Jet Truck, disappears behind it and tumbles after emerging on the other side. Gasps can be heard in the crowd as the truck breaks into pieces along the runway.

Despite what it looks like in many of the videos, the fireball was pyrotechnics and Mr. Darnell did not drive through the flames, Ms. Haluszka said.

A.I. Is Becoming More Conversational. But Will It Get More Honest?
“The pyro is on the grass,” she said. “The jet truck is running on the runway. From the crowd’s side, it looks like he’s driving straight through the pyro. But he’s not.”

A spokesman for the Federal Aviation Administration said that because the accident involved a truck, not an airplane, the agency was not investigating. The Battle Creek Police Department, which is investigating, confirmed on Facebook the death of Mr. Darnell, 40, but said it had no more information about the crash. The department could not immediately be reached for comment.

The vehicle was owned by Darnell Racing Enterprises. Phone and email messages left for the company were not immediately returned on Saturday night. The truck was described on a website for it as being able to reach speeds topping 350 m.p.h. and as “the most powerful truck in the world,” with three engines providing 21,000 pounds of thrust.

“This is truly an assault of all your senses with huge flames coming out of the 3 after-burning jet engines, fire shooting out of the smoke stacks, intense heat, deafening noise, and SPEED!” the website said.

Mr. Traver said Mr. Darnell’s act included pyrotechnics, but he could not say whether that had anything to do with the crash. Several years ago, Mr. Traver wore a fire-retardant suit and rode in the Shockwave, a ride he called “a heckuva experience.”

“It’s just unreal to be in a vehicle with a jet engine and to be propelled from zero to 300 that quickly,” he said. “It’s not like it’s a car at a racetrack, where you’re slowly getting up to top speed. It’s zero to top speed.” 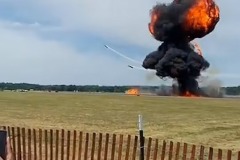 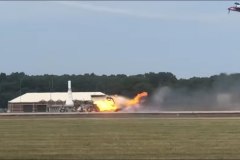 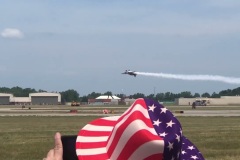 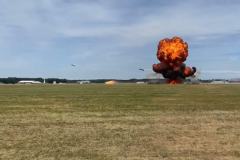